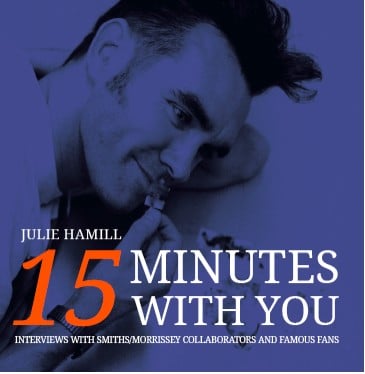 Over 300 pages of fascinating interviews.

It's well documented that Morrissey has a handful of friends that he keeps close. He values his privacy and that is to be respected, especially by a fan. But for a fan like Julie Hamill, of thirty years, it's hard not to want to know everything about him, the truth, not the fair-weather and often blackened portrayals of him in the press.

These fans want to know for themselves: Who is Morrissey? What does he really talk about? What does he eat? How does he take his tea? What makes him laugh? Is he like me? Not wanting to intrude, or rummage through his bins, Julie simply wanted to know how human he is, because she knows she will never get that close to this genius that has been a constant in her life, both in terms of lyrical comfort, fascination and awe.

Each interview led Julie to discover more than just how deeply people felt connected to Morrissey. She discovered more about each one as a person too. Their favourite things, what makes them tick, and out of one simple request to Mark Nevin for an autograph for her mum, Julie also ended up with a special collection of notes from all the contributors to her mum.

With each interview taking around 15 minutes to read, this book gives a different perspective on the man, his music and his fans connection to him.

Featuring 24 interviews and a collection of photos, including many from Julie's meetings with these famous fans, this book gives an insight into the fascination they have with Morrissey and hidden aspects of their own lives.

At over 300 pages and plenty of Julie's photos, this book will keep you entertained for a lot more than 15 minutes.

Recommend this to a friend  +